One of Herndon Elementary School’s biggest sources of volunteers and donations is right across the street.  While you probably have seen or heard people from Trinity Presbyterian Church at meetings or school events, just how much they do for our school was a surprise when we

sat down and reminisced over the 10-year partnership with Pastors Stephen Smith-Cobbs and Becca Messman. What is no surprise is that Trinity Presbyterian Church believes that the power of the partnership rests in a real relationship, in creating a community of people who are neighbors because of love for others as much as geography.

Before the pandemic, many of Trinity’s school volunteers were seen around the school reading, gardening, and tutoring. The community garden on Trinity property was used by a 3rd grade class to study biology. Athletic volunteers participated in Girls on the Run, a student running club. Several men did handiwork and constructed displays in the library and the bin for books. There are weekly parenting classes and lunch at the church for Spanish-speaking parents. A few years ago, the church launched a huge book drive. “Knowing that kids with books at home retain their literacy skills, our initial expectation was maybe 1,000 donations,” said Pastor Becca.  They partnered with local author and then-teacher Glennon Doyle for a book signing, and it snowballed from there.  The effort led to a bookmobile with around 20,000 donated books driving around the Park View neighborhood. Volunteers brought blankets and books and read to children at Park View apartments.  After spending time together reading, they gave the kids the books and a popsicle. It turned out to be a huge success!

Since the pandemic hit last year, School Counselor Tiffany Bryant mentioned that Trinity has been a consistent source of “food, clothes, mentors, money, and time.” Monthly meetings with the principal are about two questions, “What do you need and how can we help?” The answers to those questions changed over the years since 2011, and sometimes the meetings are a brain dump of new needs that have surfaced, from reading glasses to financial help.  The Weekend Backpack program took off when the county wasn’t able to fully provide the amount of food needed by Herndon families. The food and donations are stored at the church in partnership with Food for Neighbors and are distributed at the school to a good portion of the students. As Becca states, “The needs didn’t go away with the pandemic, so we hope to restart our programs in the future. But the pandemic made us really focus on the biggest needs for the community. We still visit the neighborhood three times a week with food.”

Pastor Stephen says that Trinity’s diligent work on the partnership with HES is more than just a general desire for community building.  His 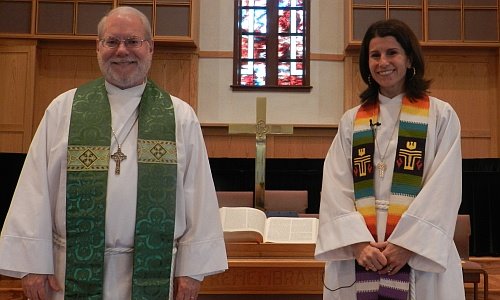 son’s first year at HES was also School Counselor Tiffany Bryant’s first year as a counselor. “She greeted all the kids at the front door in the morning, smiling and laughing, and that made an impression on me about the school” that they prioritize relationships with the students. Over the years, Ms. Bryant asked him to participate in our annual Career Day, when parents and people from the community come in and talk about their professions. “I always enjoyed doing it, but one time was really moving. Most of the time when I go,” he chuckled, “I’m next to the SWAT Team or something and look so lame. But one time sticks in my mind, when a little boy came up to me and asked if I do funerals.”
He responded in surprise, “Yes, our church does funerals.”
The little boy hesitated and then offered, “I went to one last week.”
“You did?” asked Pastor Stephen kindly.
“Yeah. My dad.”
“It was the first time the school had heard about his loss,” recalled Pastor Stephen, “and we were able to tell [Ms. Bryant] and reach out to this family.” It was such a crucial point in this young student’s life, and it was so helpful that he was surrounded by adults who cared and were there to listen.

One of Pastor Becca’s fondest—and funniest—memories was helping out with Girls on the Run. “I think I’m a great runner, and I love working with the students and encouraging them! There always has to be an adult by their side as we run around the community, and I thought it would be easy because I was working with such young kids. But there was a 4th grader who because of the club went from running a 15-minute mile to a 6-minute mile. I was panting so hard and trying to keep up. I felt like I was dying! I was exhausted and could barely make it to the end of the run, and it was right before our service on Sunday night. I barely made it and walked into the service with my tennis shoes on, breathing heavily.  But her mom was so proud!”

That kind of realness in a relationship gets results. “When your partnership is based on relationships, one-on-one relationships of trust, it is truly transformative,” says Pastor Becca. “[Former Assistant Principal] Ray Lonnett could look at test scores and see in situations where kids had relationships, their scores would jump 2-3 levels on their SOLs. The kids transformed with the connections just by knowing they had not only a school community but also a bigger community rooting for them.”  Pastor Stephen added, “The schools are the gateway to being part of the community, not just because of the kids, but because of the parents.”

Trinity is one of the partners working with Ms. Bryant and Ms. Snyder in reaching out to Spanish-speaking families in a larger context by connecting with families and helping them connect with each other. One of the most successful events is the weekly parenting class and lunch.

Pastor Becca remembers a little girl named “C” in particular who she has watched grow up in a difficult circumstance. “She has thrived at Herndon High! Her mom was part of the parenting class. C recognized faces in the hallway when we and other community parents would visit and knew she was liked. When you know the community players, the police chief, firemen, the neighborhood patrol, you can say, ‘They remember me and care.’ That gives kids a sense of safety and belonging. Learning is strengthened when you have healthy emotional connections to others at your school. It makes the kids comfortable and open to learning.”

Little students from the preschool at Trinity who graduate to HES like telling their friends, “They know me,” and beam when they see the pastors in the halls.  Pastor Stephen said, “The thing I miss the most is reading to the kindergarten class once a month. I got a real education on all the cool new Kindergarten books out there.  My sister and mom are kindergarten teachers, so it was a real nice connection.”

Having Trinity as a community source is also good for supervisors and other leaders in FCPS who “need to get to know who actually lives here, not just the numbers but faces and experiences. It provides a holistic connection for the whole family and child to see past what’s just on paper. We are a point of connection between the county and the Herndon community.”

Everyone at Trinity is looking forward to the next school year. “This year is going to be a really important year, because there’s a new principal, and that’s always a time to renew the relationship. We’re confident that will be successful going forward,” said Pastor Stephen. “It’s been a real gift to be in partnership with HES. It takes a lot to get going, to get that connection to work together for the kids.”

Pastor Becca said she is “looking forward to meeting the new principal too, because we’re not assuming the needs stay the same with each group of people. The transition between [former principal Ann] Gwynn and [former principal] Teresa Fennesy was smooth, because we just want to hear the needs, which will develop with changes in leadership.”

Every Fall, there is a rededication at the church of the partnership. One year, Mr. Falkey dressed up as the Herndon Bee mascot and talked about the benefits. “People of all ages were mobilized, and it’s always a lot of fun to see the Bee!” smiled Pastor Becca.

In particular, they’d like to restart plans for an after-school program for the Herndon pyramid schools. “We were almost ready to launch it, and then the quarantine hit. There would be free buses to take the kids home. Two days a week, the kids would play soccer and two days a week they would learn poetry. Fridays would be game days when the soccer teams would play each other.  It would be another platform to build relationships between teachers and parents, because they’re in the same place and have time to talk and get to know each other better.

We want to thank Trinity Presbyterian Church for their dedicated service to the students and staff at Herndon Elementary over the last ten years.  It is indeed good to be your neighbor!  Here’s looking forward to the next ten years together!